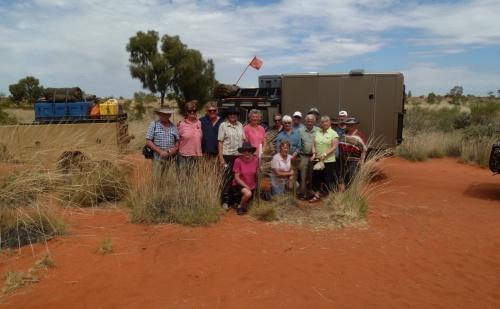 We were 16 passengers of mature age who had all travelled with Outback Spirit previously. There were 4 terrific blokes who drove the purpose designed vehicles, set up camp, cooked our meals, provided information on the track and the Surveyor Alfred Canning, and kept the show on the road.

If team work could be bottled these 4 would be the best ingredients. We slept in tents which we put up each night but help was provided to those who needed it such as the 3 women travelling alone. I had slept in these tents on a tour 20 years ago but they had got heavier in the intervening years.

We had stretchers, mattresses and sleeping bags. A few nights were extremely cold and on one night I had on 2 jumpers.

Packing up from lunch

We met Mateusz from Poland who was attempting to ride his 3 wheel bicycle along the Canning Stock Route. He had attempted the ride with his wife last year. He had a solar panel for communications, 6 saddle bags with 25 kg of food, mosquito tent etc. 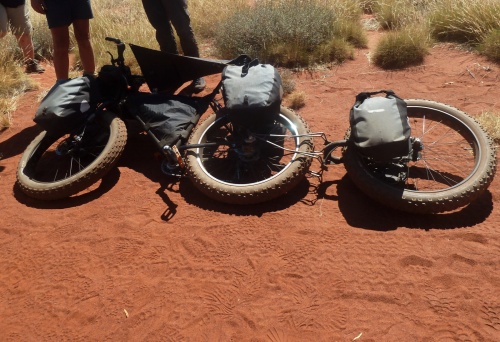 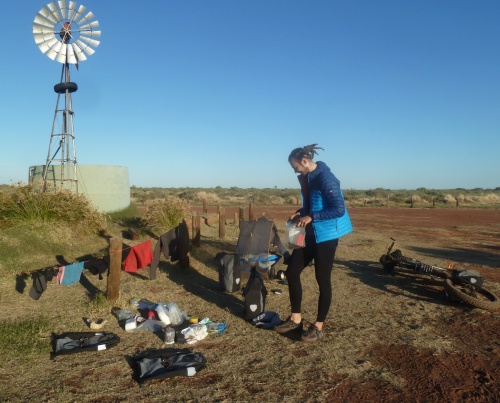 Mateusz with his gear

We dropped 30 litres of water for him further along the track. He has a Facebook page in Polish.

Mateusz was attempting to recreate the ride of Jakub Postrzygacz.

In 2005 Jakub Postrzygacz became the first person to traverse the entire track without either support or the use of food drops, travelling alone by bicycle for 33 days. With large tyres and a single-wheel trailer, he carried all his food with him and replenished his water at wells.